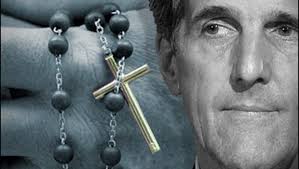 Secretary of State John Kerry is on quite a roll lately.

First he compared Israel, our most strategic ally, to an apartheid state. Now he’s revealing what Leftists really think about religion  and absolute truth in general:

“Some people believe that people ought  to be able to only do what they say they ought to do, or to believe what they  say they ought to believe, or live by their interpretation of something  that was written down a thousand plus, two thousand years ago. That’s  not the way I think most people want to live.” Ironically, Kerry is condemning himself with these words.

POLL: The Supreme Court ruled that a prayer before town meetings is not a Constitutional violation. Did SCOTUS get it right?

See, like many Leftists, Kerry will claim to be Catholic but that “he can’t  impose his personal beliefs” on others in the public sphere. But then he will  turn right around and bastardize and distort all kinds of Christian teaching to  justify his belief in a welfare state, thus imposing his private religious  beliefs upon public policy. That in and of itself is his own interpretation of  his thousands of years old religion. By making the value statement that he gets  to decide what and when to keep his private thoughts private or impose them on  you (“ye be like God” anyone?), Kerry is guilty of the very reasoning he says  he’s against.

The double-minded man is unstable in all his ways.

As a Christian I don’t believe I can vote for someone like this for any  public office. Not because he’s a Democrat. Sadly, the airborne contagion known  as “post-modernism” is now infesting the Republican Party as well. Rather, I  can’t vote for someone who’s line of reasoning and worldview mimics the words of  the serpent himself when sin first enters into the world — no matter what team,  faction, or party he’s with.

I’ll give Kerry credit for one thing. Normally we don’t get to hear what  Leftists really believe because they get away with just calling all of us names.  But in this statement Kerry is letting you know that when you remove all the  enlightened and empty rhetoric about tolerance, fairness, and justice, at its  core theirs is a worldview first spoken into the world with forked tongue.

Kerrys religion is Liberalism and his God is Government. He is about as pathetic as anyone can be. His favorite phrase is the ends justifies the means only a liberal communist can have a belief like that. He has a warped mind and can never be trusted in what he says or does.

I once read "there are only two things in live, LOVE and POWER. No man/woman  can own both." By the very nature of politics power and money are the name of the game. Love of country, love of family, Love of God  and Love of self can not exist.

Letter to the Editor: Restore Religious Freedom. On June 2, 1979, one man initiated the collapse of repressive atheism in Europe. His words to hundreds of thousands of citizens in Victory Square prompted their thunderous response of “We Want God.” Then millions of their fellow citizens took up the call to restore religious freedom to their nation, and their political leaders in Moscow knew that Pope Saint John Paul II would win (see Peggy Noonan’s article “We Want God”). In America we can draw on those same three words to stop the assault on religious freedom being conducted by repressive bureaucracies in Washington. Our path to success will be through the voting process on November 4, 2014, as we vote for political candidates who will honor our religious freedoms. Use our votes to tell them “We Want God.” Fred Denny, St. Louis, MO

Kerry has flawed brain connections.  Something just isn't right with him, but then Liberalism is a mental illness.  I really believe that.

This echoes my sentiments exactly!

FURTHER PROOF THAT TRAITOR KERRY IS NOTHING MORE THAN A JEW & CHRISTIAN HATING MUSLIM LOVING OBAMA ASS KISSING COMMUNIST MINION!   WHEN ARE "WE THE PEOPLE" GOING TO TAKE OUR CHRISTIAN CONSERVATIVE GOVERNMENT BACK FROM THESE BLATANT COMMUNISTS?

Permalink Reply by Arnold Clay Sindledecker on May 7, 2014 at 11:42am
If I said it once I said it a thousand times. Look at the man. No.. Really take a look. He is a dumbass

Secretary Lurch has a talent for sticking his foot in his mouth.  He just needs one more, the one in my boot...Semper Fi Nam 66-67

We are going to have to do so much to clean up this government and country and it is going to be a long, hard road to recovery.

The Nicean (Apostles) Creed: We believe in one God, the Father Almighty, maker ofheaven and earth, and of all things visible and invisible. And in oneLord Jesus Christ, the only begotten Son of God, and born of the Father before all ages. (God of God) light of light, true God of true God. Begotten not made, consubstantial to the Father, by whom all things were made. Who for us men and for our salvation came down from heaven. And was incarnate of the Holy Ghost and of the Virgin Mary and was made man; was crucified also for us under Pontius Pilate, suffered and was buried; and the third day rose againaccording to the Scriptures. And ascended into heaven, sits at the right hand of the Father, and shall come again with glory to judgethe living and the dead, of whose Kingdom there shall be no end. And in the Holy Ghost, the Lord and Giver of life, who proceeds from the Father (and the Son), who together with the Father and the Son is to be adored and glorified, who spoke by the Prophets. And one holy, catholic, and apostolic Church. We confess one baptism for the remission of sins. And we look for the resurrection of the dead and the life of the world to come. Amen."

John Kerry can believe anything he wishes to believe.  But unless he believes the above, he can't call himself Roman Catholic.