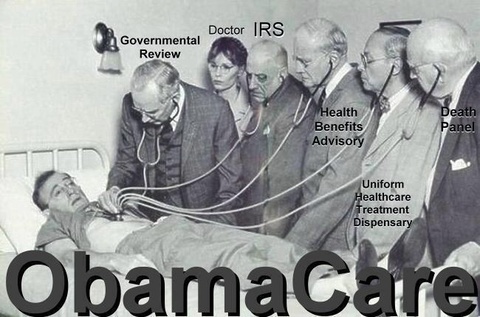 The House voted Tuesday to repeal another piece of Obamacare, this time a

Medicare cost-cutting board that opponents have decried as a “death panel” that could ration care.

Majority Republicans led the charge to repeal the Independent Payment Advisory Board (IPAB), 244 votes to 154, and were joined by 11 Democrats who ignored President Obama’s veto threat.

The Affordable Care Act of 2010 created the board to recommend savings within Medicare if the program exceeded a target growth rate. It would implement those changes unless Congress overruled it through legislation that achieved similar aims, or if 60 senators voted to override its cost-cutting provisions.

Critics have lambasted the IPAB as “15 unelected bureaucrats” who ostensibly could rein in seniors’ care, although no one’s been appointed to the board yet.

“This unelected panel exists only to take control away from patients and rations care — and it’s seniors who will suffer the consequences,” said Ways and Means Committee Chairman Paul Ryan, Wisconsin Republican.

Some Democrats agreed but didn’t like how the Republicans paid for repeal — $7 billion from Obamacare’s prevention and public health fund — while others said the bill was just another part of the GOP’s overall scheme to take down the health care law, and that they should give IPAB a chance.

Permalink Reply by david yoakum on June 24, 2015 at 3:32pm
Repeal obola and his czars...all his MINIONS...chief rock buster.
Nullify every single thing he touched...a washing of turds...yuk

where in the hell were the repubs when they approved obamas budget an approved funding of obamacare...I mean WTF over.

Where is SCOTUS?  They said it was constitutional when it clearly is NOT.  You cannot believe anything that b.o. says.  But he must have lots of pictures that puts a ring in the nose of every congressman.  Especially in boner and mcconnell they seem so eager do b.o.'s bidding.

This bill is a death warrant for the elderly.  Something Obama can't stand - the older generation  why  because we see the evil he is doing.  We can and should educate all about communism.  Plus if he agrees with abortion why would killing the elderly make a difference to  him.

Permalink Reply by Carla jones on June 24, 2015 at 5:40pm
Wait! This man is upset about murders from a gun in Charleston BUT WANTS TO MURDER THE ELDERLY??? This is a sick mind just like the boy that shot those people. With a sick mind that wants to murder the Americans that have paid the price to be taken care of he is an ACTUAL MURDERER and cannot be commander in chief of America.Was Charleston an act?? Did he just do it to be able to take guns from Americans so he can have us killed OF COURSE HE DID!

Permalink Reply by Mary Gomez on June 24, 2015 at 5:50pm
I WAS UNDER THE IMPRESSION THAT ALL OF COMMIECARE IS A DEATH PANEL . JUST ASK THOSE WHO HAVE HAD THEIR INSURANCE CANCELLED .

If the Bastards had kept their Promises, they whole damn thing would

NOT NEED TO  BE REPEALED PIECE BY PIECE!!!

Repealing all the Garbage in that thing will take a 100 years.

Surely no one is sending these Clowns a dime anymore!!!

Nope, nope and nope..what they do get is their mail back with a copy of the Constitution and a piece of my mind.

obummer care and the obummer regime need to be terminated.

Permalink Reply by Skip peters on June 24, 2015 at 6:24pm
I hate to say this but I feel I must. Nothing will come of this vote Obama still has the Senate to hold his hand and if they let it go Obama will veto it while there fighting Obamacare Obama is selling out America trade. Next step One World Order! We are already hearing it. Obama is most likely the Antichrist. Being a Muslim puts him high on the list.