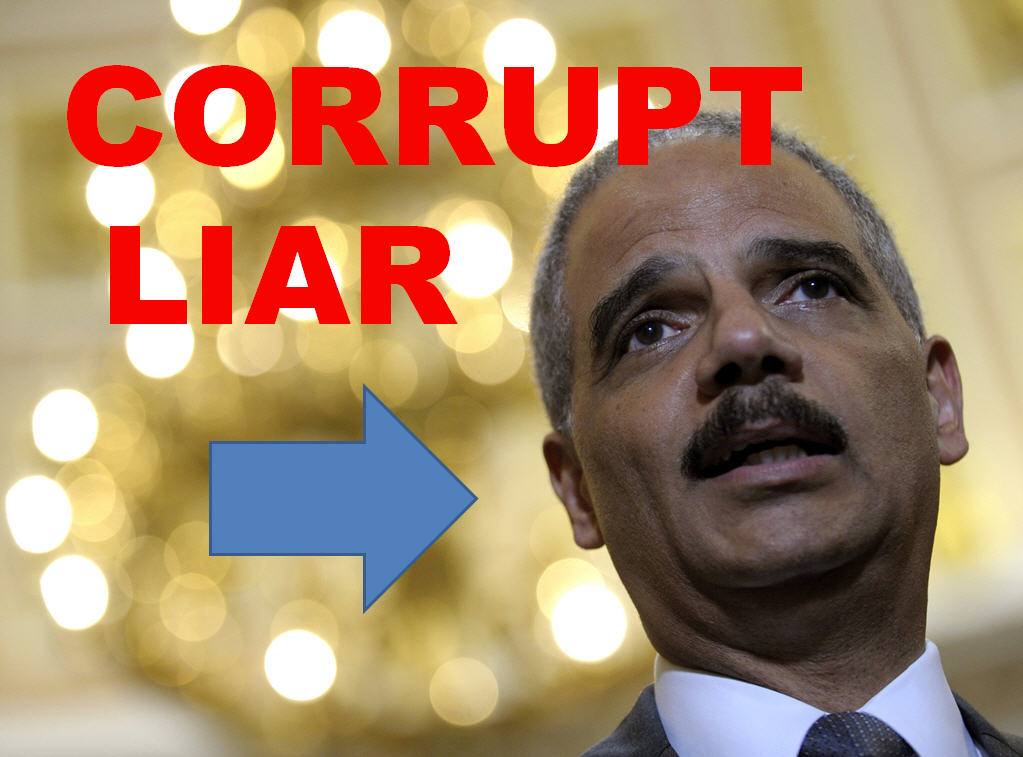 Michael Ledeen posted the most recent of hundreds of articles calling for Holder to resign — he’s “maxed out his race card,” the figurative saying goes. But is the use of “race card” really figurative when it comes to our attorney general? Sadly, no — Holder really does carry around a race card in his wallet.

And what the card says speaks to the whole nasty entanglement of the Department of Justice, Malik Zulu Shabazz of the New Black Panthers, and the Trayvon Martin affair.

Kudoos to everyone here it has become obvious that We The People are being tested and behind that testing are some pretty shady characters, what we need is our own version of a modern day John Wayne that can start kicking some A$$,and i just think he or she exist yet,yes there are a lot of us that have great ideas and are spitting blood over what,s happening to our country. So if your out there i think it,s time you came forward because the muslim ovomit is not listening to anyone, and he is the problem.

Permalink Reply by Michael Higdon on July 12, 2013 at 6:45pm
I'm beginning to think Holder, Obama and the entire administration are the "Untouchables" We continue to post criticism, waste tax money with hearings but no firing, no accountability...no results ..then more of the same...I'm tired and disappointed. Same oh..Same oh!! I want ACCOUNTABILITY AND JUSTICE. TIRED OF THE REPEATED POSTING AND BITCHING,!! Let me know if you have a plan of REAL RESULTS and I' m in otherwise I'm out!!

Michael... you are not alone.  I have written an article title What Now on this site... you may want to read it.  The Tea Party Movement must respond to the growing frustration and more of the same won't cut it.

Bad move, Ron.....I closed that discussion because you didn't know what you were talking about.  Now this....I will let the Admins make a final decision on your membership here.  The 'frustration' has been here since day one of the Tea Party movement.  Where were you 5-6 years ago?  Every Admin on this site has been in the trenches and battling the left since before Obama was elected.  Now, a Johnny come lately wants to tell us how we 'should' be doing things?  Again, where were you prior to the 2008 election?  I know where I was and I know where my Admins were....

Permalink Reply by Michael Higdon on July 12, 2013 at 7:38pm
Col. You have a beautiful family . My father flew the C130 taking me to Basic training one week following my high school graduation. No discussion...Parental influence had its place. Serve my Country first...college and other life events came second. I have deep rooted principals and convictions. GOD first, accountability, family values, honesty, Integrity.....I have worked hard and done well....missed many special events with my children on business travels to provide the better things America provides. Now I'm 63 planning retirement in 3 yrs.. No pension prudently invested in 401k, IRA, and other investments. I've done my part looking forward to traveling and enjoying my final years at the mercy of Obama, Bernanke, Wall Street and the line dancing IRS. I can't relax as I've lost confidence and trust in our Govenment. It's a sad situation!! Perhaps I can become a professional student and get a Government College loan if necessary to supplement my income!! America is broke, our leaders have lost their integrity to special interest groups. Hypocrisy has become the norm. Journalism has died. Yes I am angry but will be the first in line to take a leadership position making sacrifice as necessary if I knew it would make a Real difference restoring honesty, accountability and integrity . Our Republican Establishment is made up of a few good men and women and a lot of RINOs. Yelp ....here I am finishing my cigar with my empty wine glass bitching like all the rest with no constructive expectations other than the enjoyment of m cigar and merlot. Salute, Sir, thank you for your service and your pride posting a family pic.

So exactly what is it you want done Michael?   What REAL RESULTS are you demanding?  And exactly how are you helping us attain these results?

Permalink Reply by Michael Higdon on July 12, 2013 at 8:07pm
Lets start with a fair tax, then honesty and truth resulting in firings, and other actions involving Fast & Furious, Bengozi, The corrupt IRS... How bout term limits and addressing the the lobbyist and special interest restoring integrity, Attacking the bias media restoring truthful journalism. Address the debt and artificial economy created by Bernanke. Lets secure the borders and then we can address the emigration issue. Let's stop the demagoguery and political efforts to divide this Country. We are becoming a totalitarian government. I'm tired of the Saul Alinsky tactics .".The means justifies the end" The excessive and convenient allegation of racism.

Michael never give up if you do then you become part of the problem.

Permalink Reply by Walt Hutchens on July 13, 2013 at 10:28am
Michael we gave the Progressive movement an 80-year head start. Roosevelt kicked off the growth of fat nanny goverment and most Democratic presidents since then have added to it. Obama is the first to go deeply into wildly illegal tactics but with a government grown this big something like him was bound to happen sooner or later.

Now we come along and expect to see the whole mess undone in five or six years? Well, that would be nice, but it's not realistic. We're fighting policies that have roots in our fathers' and grandfathers' times; yanking all that stuff out is going to take time.

The Founders had much the same situation -- decades of bad policy so that most people were accustomed, even dependent on it. They stuck with it and created our independence and our constitution. Many of them actually fought and died to make that happen. Now we -- some of us -- find it just too harrrrdddd! to commit to what may be no worse than ten-fifteen years of talking about the issues and voting?

Does 'summer soldiers and sunshine patriots' ring any bells?

Obama ,Him and the Wussy panhters and those who run the DOJ should all be behind bars  and then get all the others.!!!!

I would have to say beyond corrupt.

Permalink Reply by Ronald G. Stewart on July 12, 2013 at 6:53pm
Holder , Obama and all there buddies are Racist. I'm sick and tired of all the uniformed Bastards that still believe in Obama. This is our America too. It belongs to the good people. Let's take it back. No more free rides. No more disability for dead beats. Pay your way. Zimmerman is innocent. Holder should arrest him self. Obama and Holder want civil unrest. The want Marshall law. They want to destroy America. .