Republicans broadly slammed President Barack Obama's executive orders to give work permits and defer deportations to as many as 5 million illegal immigrants, with some legislators telling Newsmax on Thursday that his unilateral actions amounted to a declaration of war.

"He's throwing down the gauntlet — and this is really a political tactic," said Texas Rep. Steve Stockman. "It's to divide the Republican Party. It has little to do with the people he professes to want to protect."

"That's not what the American people want, to just draw a line in the sand and if you step over it, I'm going to fight you," Georgia Rep. Jack Kingston told Newsmax. "I'm still stunned at his audacity."

"The whole systematic approach of the chief law enforcement officer in America devising incredibly complex schemes to not enforce the law is stunning," he said.

"It's just a further collapse of law enforcement throughout America and it's the wrong thing to do. It's going to impact Americans in their jobs, in their neighborhoods, in their schools, and in their hospitals."

In a speech from the White House that was televised nationwide on cable TV, Obama announced some of the most sweeping changes to the nation's immigration system in decades.

They are all in bed with the thug. They have already indicated that impeachment is not an option. We the people have every right to overthrow this corrupt government. Not going to happen; too many gutless lazy ass Americans.

Joyner said most of the horrific crimes would happen in the West ( I wonder if the open border, "give em all Amnesty" policy is what finally breaks the camels back).

I also heard an interesting program from prophecyclub. com ( he was on Sid Roth) I think the presenters name was Lindsey Williams. He had a program about what America would be like in the four years after obama got into office this last time. And Lindsey said that he got the information from his close friends in high places about obama's plans to destroy America. I may have also inadvertently added some of Shane Warren's findings in the following points. See Shane Warren  on Sid Roth

1. Put the American people in tremendous debt but don't collapse them yet though. Through this like impossible high taxes on the middle class, health care taxes, amnesty, global warming scams, unfair trade agreements and wars.

2. Get control of health care

3. Get control over education

5. Give Amnesty under the guise of helping the poor hispanic illegals when the true reason obama wants Amnesty is to bring in Millions of muslims and install shari'a law. The elites know that obama is a muslim.

6. Take over mortgages homes and businesses

7. Get Americans on gov't assistance of some kind

8. "Messiah agenda" that is take over the churches to get more control of the people Do this through 501C3 program.  War against Christians and Jews

Interesting to note that Lucifer and his followers seek to Divide, Conquers and Destroy all in their path. And obama's main mentor, Saul Alynsky dedicated his book "Rules for Radicals" to HIS main mentor, Lucifer.

Our solution is repent, pray and follow HIM. And study and practice Spiritual Warfare.

And Imprison on grounds of treason!

THIS BASS-TURD NEEDS TO GO!

ARREST OBAMA AND PUT HIM IN JAIL NOW!

Obama is provoking.  He is an eyesore for the democrap party, so he is resentful, he will do his best to create anarchy and discontent.  Obama is an anti American professional trouble maker.

YES LOLA HE WANTS CIVIL WAR AND A THIRD WORLD NATION HE CONTROLS HE HAS NO REGRETS OR FEELS HES DONE ONE THING WRONG WE KNOW BETTER.

TIME TO STOP IT AND ONLY WE CAN

WOW! What theatrics! It's like watching a Hollywood movie... all the players are pretending to be the good guy walking the moral high ground. It's the good cop bad cop scenario! ARE YOU ENJOYING IT?

As we're led to the ultimate disaster we can at least enjoy the acting. The king used to have fools to entertain him... now they are doing it at the destruction of the country.

That's okay, we'll wait until 2016 as they slowly  turn up the heat... it will be TOO LATE to jump out for we will be cooked well done... finished!

I know; with Obama in the starring role as Wife Beater in charge.  Beat the crap out of her then walk outside smiling towards the neighbors and if anyone questions why his [spouse] is bloodied, explain with great concern and caring to them, that he is concerned too for her well-being and he is trying to help her - but she is clumsy and gets hurt a lot.

(then rush back in the house and beat her again because someone noticed what he'd done.)

Permalink Reply by Robert William Metcalf on November 21, 2014 at 6:56am
To start with-He can't implement it without $$$$$$$$$. Tell Bonier his comment" Government Shutdown is not a option " to Obama was like Obama's comment to ISIS, " No troops on the ground ". Second-the GOP Governors take action, law suits, Article V. Third-the first of the year, start the Impeachment process!

Permalink Reply by Mary Gomez on November 21, 2014 at 7:30am
TOO BAD THE GOP DIDNT STAND STRONG AGAINST AMNESTY THIRTY YEARS AGO . NOW IT WILL BE AN EPIC FIGHT TO GET THINGS BACK IN ORDER . THE NATION HAS BEEN CHANGED FOREVER, AND LA RAZA ISNT DONE YET . 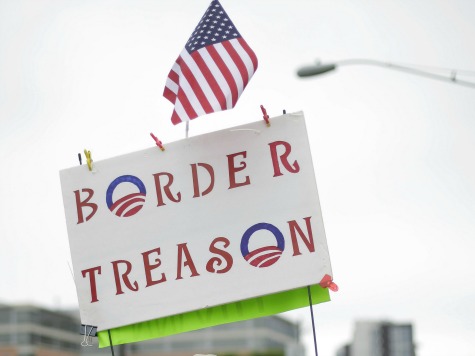 "The whole systematic approach of the chief law enforcement officer in America devising incredibly complex schemes to not enforce the law is stunning," he said.

"It's just a further collapse of law enforcement throughout America and it's the wrong thing to do. It's going to impact Americans in their jobs, in their neighborhoods, in their schools, and in their hospitals."

In a speech from the White House that was televised nationwide on cable TV, Obama announced some of the most sweeping changes to the nation's immigration system in decades.

The orders would protect as many as 5 million illegals from immediate deportation and grant most of them work permits.

Obama said he was acting unilaterally because the House has failed to pass comprehensive immigration reform legislation similar to the bipartisan Gang of Eight bill that the Senate approved in June 2013.

"To those members of Congress who question my authority to make our immigration system work better, or question the wisdom of me acting where Congress has failed, I have one answer: Pass a bill," Obama said. "The real amnesty is leaving this broken system the way it is."


With the president's actions, illegals who are parents of U.S. citizens and legal permanent residents — those with green cards — would be spared from deportation for three years. They must register with the federal government, pass a background check, and pay taxes.

None of the illegals would be eligible for citizenship or green cards, or federal benefits. They would, however, receive work permits, Social Security numbers — and a guarantee that, unless they commit a serious criminal offense, they would not be deported.

The orders also expand the Deferred Action for Childhood Arrivals (DACA) program that Obama created in 2012 to illegals who were brought to the U.S. as children before 2010, three years beyond the original deadline of June 15, 2007.

But parents of DACA children would not be protected by the new orders. Neither would illegals without children who have been in the U.S. for long periods of time.

The orders also would prioritize deportation against gang members, felons, and suspected terrorists. This is a key component of a new program that replaces the Secure Communities program, which turned over illegals arrested for local crimes to federal immigration authorities.

Obama's actions also would commit more resources to fight illegal immigration at the U.S.-Mexico border and increase salaries for beleaguered Immigration and Customs Enforcement officers. This would bring their pay in line with the FBI and other federal policing agencies.

"It does not grant citizenship, or the right to stay here permanently, or offer the same benefits that citizens receive — only Congress can do that," Obama said during the 15-minute speech. "All we're saying is we're not going to deport you."

Other Republicans were just as enraged at Obama's announcement and vowed to pursue all legal and legislative ways of stopping them.

Sessions, who will chair the Senate Budget Committee in the new GOP-controlled Congress in January, has called for including language in an appropriations bill that would keep the federal government running after Dec. 11 that would defund any efforts to implement Obama's orders.

Two House Republicans, Ted Poe of Texas and Diane Black of Tennessee, earlier Thursday introduced the Separation of Powers Act, which would bar funds for granting any form of relief to illegals.

"President Obama will regret this decision," Black said. "The American public has loudly voiced their objections to the president circumventing Congress like this — and now President Obama has ignored the will of the people and set a terrible precedent for future administrations."

House Speaker John Boehner noted after Obama's speech that he has said at least 22 times that he could not make his own laws or expand any executive orders on immigration without Congress.

"The American people want both parties to focus on solving problems together," the Ohio Republican said. "They don't support unilateral action from a president who is more interested in partisan politics than working with the people's elected representatives. That is not how American democracy works."

"Granting amnesty does not secure our borders," Priebus said. "Sadly, rather than trying to solve our country's immigration problems, the president's actions are intended to poison the legislative process at a time when he should be working to bring Americans together."

Texas Rep. Louie Gohmert called the president's announcement "an oral royal decree that will be followed by a written regal decree, as any good monarch would do.

"This president is single-handedly creating a constitutional crisis and hurting the citizens he took an oath to protect and defend," he said.

Jenny Beth Martin, co-founder of the Tea Party Patriots, blasted the orders as "an unprecedented assault on the Constitution, the separation of powers, and the rule of law in the United States.

"President Obama today told millions of people, if you broke our laws to enter this country, we will not prosecute you, we will not deport you," Martin said.

"After months of crafting comprehensive immigration reform behind closed doors and delaying it to shield Democrats up for re-election, the self-proclaimed most transparent administration in history is finally announcing the scope of its lawless amnesty," charged Tennessee Rep. Marsha Blackburn.

"It signals that America is an 'open borders' society with no rules governing entrance except those announced through royal decree," she said.

South Dakota Sen. John Thune, chairman of the Senate Republican Conference, said that Obama "may have chosen to ignore the American people, but congressional Republicans won't.

"We hear their concerns, and we will take action," Thune said.

Other Republicans also weighed in on Obama's speech:

The Associated Press contributed to this report.