Sen. Dianne Feinstein (D-CA) had many “anxieties” and “fears” about Sen. Jeff Sessions’ (R-AL) nomination to attorney general, she said in her opening statement during his confirmation hearing on Tuesday. Can he effectively “dispatch himself from President-elect Donald Trump and his record,” she wondered. In particular, Feinstein insisted that Sessions’ job does not include the prosecution of former secretary of state Hillary Clinton, who we all know abused her email use and put national security at risk. During the 2016 presidential campaign, Trump suggested that he was going to hire a special prosecutor to “look into her situation.”

“An attorney general does not prosecute at direction of the president,” Feinstein said. Nor, she said, does he or she wear two hats – one as the president’s lawyer and one as the people’s lawyer.

“The attorney general must put aside loyalty to the president,” she said. The law and Constitution, she emphasized, must come first and foremost.

She hopes Sessions is up for this “awesome responsibility.”

Feinstein had a few other concerns. She claimed there’s much “fear” in the African-American community regarding Sessions’ attorney general nomination.

UNBELIEVEABLE what they will put everyone Trump wants for his cabinet through.  And yet NOBODY is saying anything about the racist remarks made against Sessions and his granddaughter.  When this little girl grows up....I'd like to see this jackass Madison explain to her why he thought he should be able to say something so cruel, why being a celebrity makes him think every STUPID thing that pops into his head should just roll right out is mouth...


MTV Host Under Fire For Comments About Sessions’ Granddaughter – ‘Racist’

Ira Madison, an African-American culture writer for MTV News, is under fire for mocking the Asian-American granddaughter of Sen. Jeff Sessions.


Sessions, President-elect Donald Trump’s choice for attorney general, brought his family to his Senate confirmation hearing Tuesday, including his four Asian-American grandchildren. Ruth Sessions Walk, his daughter, is married to an Asian-American man.

In a Twitter post, Madison accused the Alabama senator of using his Asian-American granddaughter as a prop in an attempt to avoid being seen as a racist.

Madison then took it a step further, following up with another tweet asking Sessions to “kindly return this Asian baby to the Toys ‘R’ Us you stole her from.” Of course the coward at @MTV deleted his #racist tweet, but here it is. Where are you, @MTV? pic.twitter.com/rFIeUkoiIo

I ask my 500,000 followers to join with all people of good conscience to boycott @MTV and its sponsors until #racist Ira Madison is fired.

Madison went on to say his comment was a “joke,” justifying it as an attempt to bring up “Sessions’ history of racial hatred of Asians.”

I often tell jokes, but seeing as bringing up Sessions' history of racial hatred of Asians is seen as an attack on his grandchild, I deleted

MTV quickly distanced themselves from Madison after his comments came him under fire.

“The opinions Ira expresses on Twitter are his own and do not reflect the views of MTV News,” an MTV representative said Tuesday.

His only reason is that he is a black democrap.

Permalink Reply by Hilary Joseph Hogan on January 12, 2017 at 8:11pm
Disgusting piece of slime. We continue to see the intolerant hatefulness of the communist progressive left. Ms. Feinstein, who's little bitch Scottie dog went running to Ferguson to prosecute a cop who was defending himself from a thug as a hate crime. Loretta Lynch mop who said Dallas protesters would be defended of they're right to protest when five law officer's were asssinated. Yet attorney general session's is not allowed to prosecute an international criminal named Hillary Clinton? Your brain and values are served up scrambled. Remember the jokes about Romney's adopted child. Someone has to take care of your offspring. Sure as hell ain't you big MTV. Asshole. 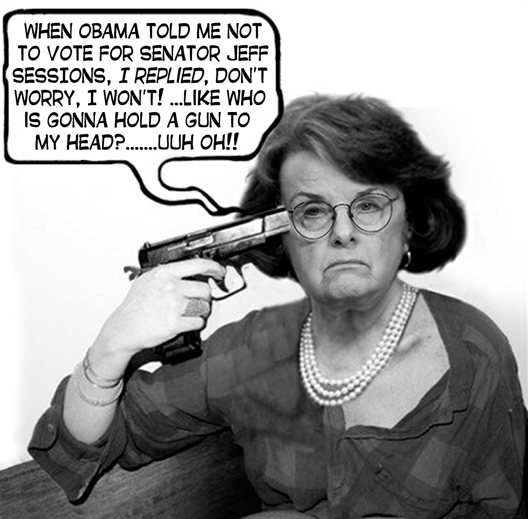 Permalink Reply by Hilary Joseph Hogan on January 12, 2017 at 9:29pm
Ever see someone on the street and think " what an unhappy misguided soul" please find a soup kitchen before I cry myself to sleep. BTW! Sleeping better myself.

I wonder if she felt that way when they confirmed the traitor Eric Holder.