Sen. Dianne Feinstein (D-CA) had many “anxieties” and “fears” about Sen. Jeff Sessions’ (R-AL) nomination to attorney general, she said in her opening statement during his confirmation hearing on Tuesday. Can he effectively “dispatch himself from President-elect Donald Trump and his record,” she wondered. In particular, Feinstein insisted that Sessions’ job does not include the prosecution of former secretary of state Hillary Clinton, who we all know abused her email use and put national security at risk. During the 2016 presidential campaign, Trump suggested that he was going to hire a special prosecutor to “look into her situation.”

“An attorney general does not prosecute at direction of the president,” Feinstein said. Nor, she said, does he or she wear two hats – one as the president’s lawyer and one as the people’s lawyer.

“The attorney general must put aside loyalty to the president,” she said. The law and Constitution, she emphasized, must come first and foremost.

She hopes Sessions is up for this “awesome responsibility.”

Feinstein had a few other concerns. She claimed there’s much “fear” in the African-American community regarding Sessions’ attorney general nomination. 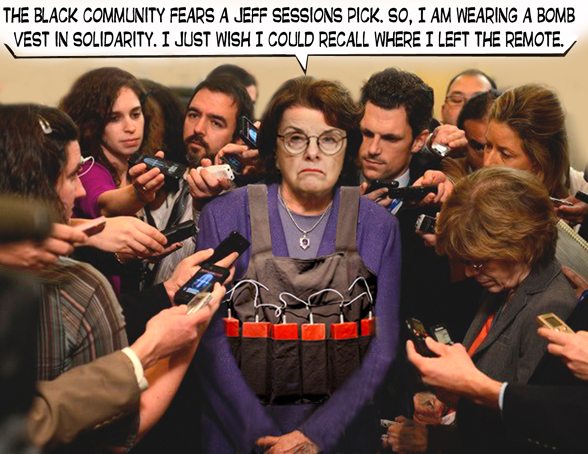 QUICK!!!!   Everybody grab your garage door openers and keep pressing....maybe somebody's is on the right frequency...

I have about 143 remotes in my house, I am only on remote #37, and will try them all immediately. TY for the info.

It is not his job to prosecute Clinton? Who voted for this ignorant thing anyway.  If it is not the AG job then whose job is it? Yosemite Sam's?

Diane Feinstein  is a waste. She isn't worth a comment at all. Such stupidity.

She's from Frisco. Need I expound?

Feinstein is little more than an old ugly hag - her "past due" date has come and gone!

Had the current FBI, DOJ, and AG done their constitutional duties, a special prosecutor would have been appointed and Hillary would have been indicted for "Pay for Play" abuse of her SoS position; security risks of classified documents; failure to comply with Congressional subpoenas; nepotism in using her position to obtain positions for her daughter's friends; conflict of interest with personal businesses; and the most serious - directly contributing to the death of an Ambassador and arms trading with enemies of the USA.

Hillary, and any other US official who commits such acts, should be brought to account for their actions. Not only it is imperative that they be held accountable, it is also necessary to prove to those who follow in these duties to understand that these actions have consequences from the American taxpayers and will NOT be tolerated!

The Townhall article is incomplete. Sessions stated at the hearing that he would recuse himself in the case of Clinton because of statements he had made about her during the campaign and turn over the case to his Deputy (not yet  named, but it will have to be someone who is not on record with comments about Clinton).

One thing that needs to be utterly destroyed in American society is this worship of what is "politically correct" being touted as the gold standard of conduct.

In my view, Sessions should absolutely NEVER recuse himself because he labeled something precisely what it was. Clinton is a lying thief, and there is absolutely no question whatsoever that she is. So too, is Obama.

Recuse is associated with bias, with discrimination and has no merit or value whatsoever when it comes to hard, proven beyond any shadow of doubt, fact.

Clinton is guilty even if she is never formally charged. The entire world knows that she is. She has convicted herself many times over. The only thing the AG must do is make it official in the bogus, fraudulent legal world that PRETENDS to be concerned with justice.

There is no justice. Look at that arrogant freakish hero of the democrats, Obama. Look at him! Giving a farewell speech in gruesome Chicago pretending that due to him and his heroics, ALL is much better since he parked his rear end in the office, the Oval Office, the one he made a joke of. Where is the justice for this treasonous goon?

How on earth can we be a Nation of Law when we allow political correctness to take the rightful place of it.

Permalink Reply by Judy & David Miller on January 11, 2017 at 7:02am
Feinstein. Another too long at the trough Kalifornia Looney. Obviously, she prefers the ilk of a Lynch & Holder.