Far Down the Slippery Slope: Lesbian Polygamy Emerges in Massachusetts 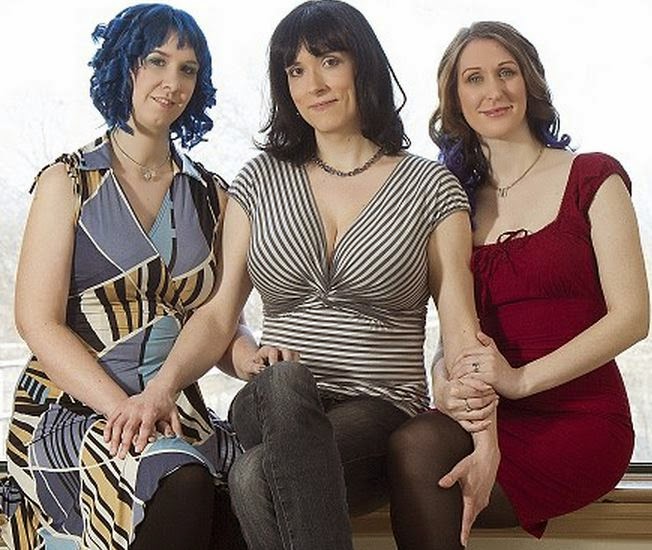 If two women can marry, why not three?

In other words, this three-way lesbian marriage is not legally recognized by state or federal law — yet. But it would be interesting to see any advocate of gay marriage make a legal argument against polygamous marriage. By the way, “handfasting” is a neo-pagan marriage ceremony, common among devotees of Wicca. (Once upon a time, witches were hanged in Massachusetts.) This story about Brynn, Doll and Kitten is so weird, I’m tempted to dismiss it as a publicity stunt or, perhaps, a desperate bid for a reality TV series contract, but who can doubt how far this fanatical devotion to Equality and Progress has gone?

I sure don't want sharia law here, no thank you.

Norma:  Yes I heard a few of those.  I also heard that if the political winds change I stand with the muslims.  Wow, it's like did anyone hear what he said?  When it comes to that, he is not lying.  Everything else is a sham, a coverup, a lie.  Benghazi is BIG right now.  It's showing it came straight from the W.H.  All kinds of things coming to light about obama and clinton, and carney covering up.  Maybe if the alphabet news comes awake and starts asking the HARD questions they will find out they have been lied to.  ABC had a journalist asking hard questions to carney and he stayed with the damn political talk points.  We don't care about talking points no more, we demand truth! See?  Political Correctness is killing us and we need to get rid of it.  Truth only!!

DeniseInAZ      The iftar dinners that Obama has in the white house/his cancelling of national prayer day....  his statement that you quoted that came from one of his books, "if the political winds change I will stand with the muslims"............every statement he has made about islam, his actions regarding islam should be plain to anyone.....Obama/barry is a practicing muslim.  I know that statement sets me up to be called a nut, but the last time I heard, free speech was still not against the law in America.  I know that drives the muslims here crazy, that is why they are trying to get criticism of islam included in the law as hate speech.  Compare Christianity with islam if you know anything about either of them, and which would anyone choose?  My heart is heavy with fear because of what is happening in my beloved country but it only makes me more determined to love my God, and  His Son, Jesus Christ.