A majority of Democrats helped Paul Ryan pass the bill.

The bill funds all of the Democrat pet projects and spends less than .1% on the border security barriers and no wall.

Conservative Mark Meadows and the Freedom Caucus voted against the outrageous Republican Omnibus.

Rep. Meadows then encouraged President Trump to veto the bill.

Members of the @freedomcaucus sent the below letter to the WH:

"Mr. President, we urge you to remember the countless forgotten men and women of America who placed their faith in you to change business as usual in Washington, D.C. We urge you to join us and reject this omnibus." pic.twitter.com/eO0B1PfCYl

This will likely be the end of the GOP majorities.
You can’t continue to spit on the voters and expect them to keep coming out to support you.

It is a democrat's dream.

All the same party as we both know?!

I can not wait for Ronald to see this, he will give birth to a litter of kittens....

WE NEED TO VOTE OUT ALL OF THEM.   SOME IN THE FREEDOM CAUCUS HAVE GUTS BUT RYAN; MCCONNELL; SCHUMER; DURBIN; PELOSI; WATERS; S. COLLINS ALL OF THEM NEED TO BE VOTED OUT OF OFFICE.

THIS NATION HAS TO SURVIVE.  WE CANNOT FUND SANC. CITIES AND PLANNED PARENTHOOD.

I KNOW IT MAY BE FUTILE BUT W/ALL THE ANTI GUN PEOPLE MARCHING WHERE ARE WE?

Yes, Ronald gave birth to a littler of kittens, this is my comment followed by his...LMAO all the way. 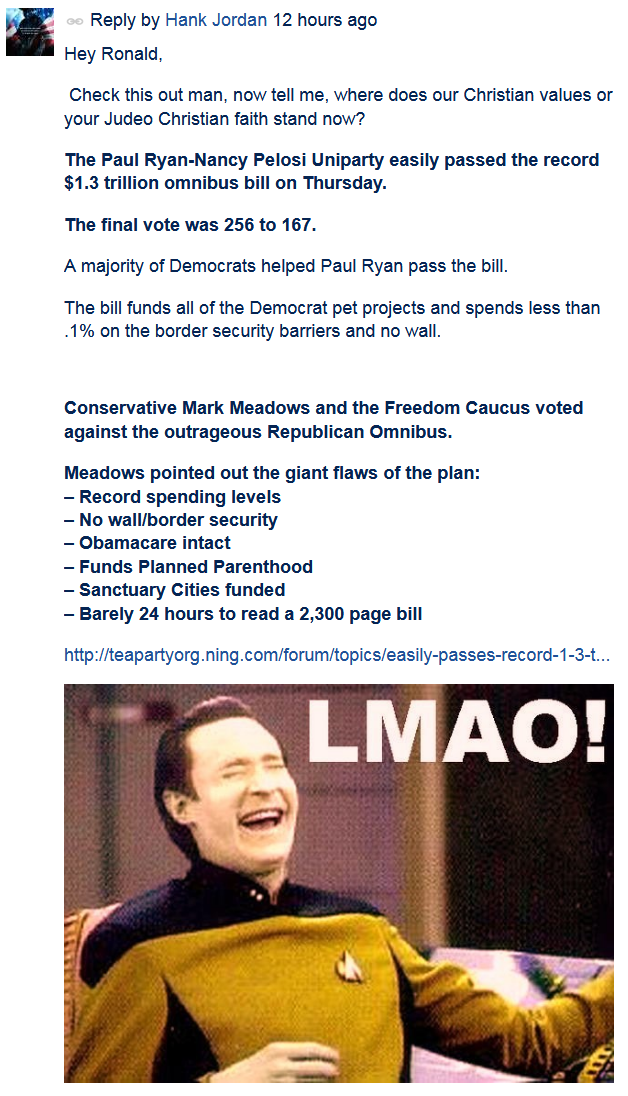 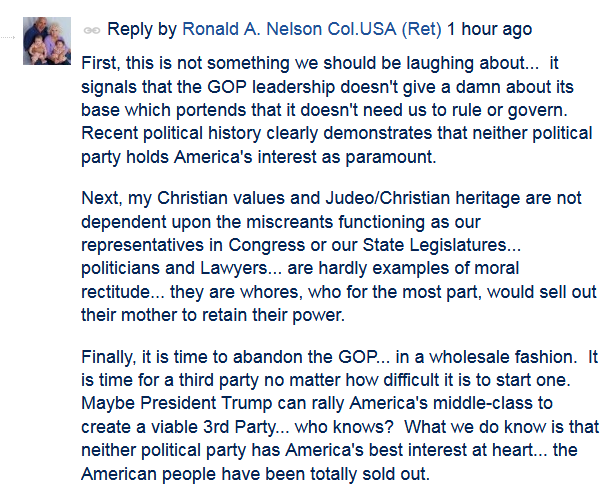 President Trump said Thursday that he was signed a $1.3 trillion omnibus spending bill because it was vital to rebuilding the military, but he trashed Democrats for tacking on extra spending and vowed to never again sign another budget-busting measure.

“I’ve said to Congress, I will never sign a bill like this again,” Mr. Trump said, calling the legislative process that produced it “ridiculous.”

Hours earlier, the president had threatened to veto the bill and all but guarantee a government shutdown when funding would have expired at midnight Friday.

He ultimately decided to sign the bill “because of the gains we made for our military,” said the president.

Blasting the bill he was about to sign for unnecessary spending, not fixing DACA and not fully funding a border wall, Mr. Trump demanded changes to Congress’ rules in order to make progress on vital issues.

He called for Congress to approve a line-item veto for the president and for the Senate to eliminate the filibuster rule that requires 60 votes to advance most legislation.

“We’ve got to get a lot of great legislation approved and without the filibuster rule it will happen just like magic,” said Mr. Trump.

Allowing a line-item veto would require a constitutional amendment as the Supreme Court ruled the procedure is unconstitutional in the 1998 decision Clinton v. City of New York.

Mr. Trump boasted that the bill provide a historic boost to military spending, including the largest pay increase for troops in a decade. The investments, he said, made good on his pledge to rebuild the U.S. military into the most formidable fighting force in the world.

“They hollowed our readiness as a military unit and put our military at very grave risk,” he said of years of defense cuts. “The omnibus bill reverses this.”

He blamed the omnibus’ huge price tag on Democrats who he said demanded extra spending in exchange for funding the military. He said the Democrats oppose military spending.

Ticktock, ticktock, the 2020 elections is just around the corner...sign the bill loose the votes, his choice.

The D.C. swamp is alive, well and flush with $1.3 trillion

Congress, led by Republicans, passed a $1.3 trillion spending bill to keep the government operational through the end of the fiscal year, September 30.

The message to voters? Democrats and Republicans are one and the same.

And what’s good for the country is not having debt out the wazoo.

The Committee for a Responsible Federal Budget estimated weeks ago the $1.3 trillion plan will lead to the Treasury running a deficit of about a trillion dollars each year. White House budget director Mick Mulvaney admitted the bill was hardly perfect, but the best that could come, given the 60-vote requirement to close debate in the Senate. And House Freedom Caucus chairman Mark Meadows blasted it as counter to conservative principles and promises to voters — right on both counts.

“This is wrong,” Meadows said, of the omnibus. “This is not the limited government conservatism our voters demand. Our constituents — our employers — deserve better.”

President Donald Trump, shortly after its congressional passage, threatened to veto it — and that’s even after tweeting his support for it earlier in the week. He then changed his mind and said he’d sign it — but never again. OK, believe it or not. That’s the choice of the individual. But really, the fate of the bill isn’t so much the story here as the actions of Republicans in Congress.

The fact that Republicans in Congress would actually stand for such spending is eye-opening and demonstrative of the very sad realization: They’re behaving like Democrats, in both spending and legislative maneuvering.

Whatever happened to fighting for the little guy?

The bill spanned 2,232 pages when it was released by leadership on Wednesday. By Friday, it was cleared by congressional vote for Trump’s signing.

Who read it? Right. Nobody! Who had time? Thanks for that, Republicans.

This is the same tactic touted by a blithe Nancy Pelosi in 2010, when she crowed of the need to pass the bloated Obamacare bill in order to find out what it contained. Republicans, remember, slammed her then.

But now? With the omnibus? The GOP simply tipped their collective hat of hypocrisy her way. Apparently, nowadays, Republicans have no problem with passing bills before reading them, either.

Come on, GOP: Get it together. Democrats have always been the tax-and-spenders. But conservatives, Republicans, those on the ideological right, have traditionally been the watchdogs on spending — the voices of reason, pointing out the pitfalls of constantly dipping into the taxpayer’s pocket to grow government, reminding how robbing Peter to pay Paul soon enough leaves Peter broke.

What the heck has happened?

The Republicans may hold the majorities in the House and in the Senate — may hold the majorities needed to fight it out, win the public relations battle against the Democrats, and ultimately, hand the Republican president of the United States something more than a budget boondoggle to sign and pass. But they’re neither willing to fight that fight, nor change the Senate rules so they can win that 60-vote war. And why? What’s the reason for this Republican failure? It’s simple.

The swamp of Washington, D.C., sucks up all.

They’re LINOs — Leaders In Name Only, and they’re swimming in the same swamp that Democrats swim, beholden to the same swamp creature as Democrats. So how can voters win? Simple. Go more for character, not partisanship — more for patriotism and America First principles than party loyalty — at the polls. It’s the only way to dredge the swamp called D.C.

Democratic win. Previous riders banning federal funding to perform most abortions and blocking the use of local and federal funding for abortions in the District of Columbia, as well as one blocking abortions for federal prisoners, will remain in force. Republicans did win a modest reduction in funding for the United Nations Population Fund, an organization that has been accused of supporting abortions abroad — a charge the organization denies. But the bill does not defund the Title X family planning or teen pregancy prevention programs or include policy riders that would prevent Planned Parenthood from accessing federal health care funds, allow states to exclude Planned Parenthood or other abortion providers from their Medicaid programs, or allow employers to block their employees from receiving insurance coverage for abortion.

Wins and losses spelled out here:

Thanks for posting the link :-)

You are welcome, Kat.