Did You Know The Statue of Liberty Was Not Built For Immigrants? 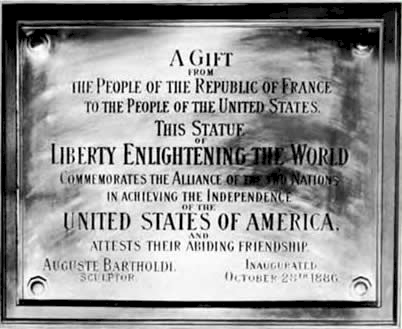 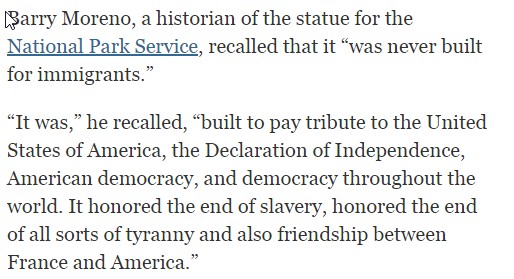 The liberal left constantly quotes the poem on the Statue of Liberty as the reason why we should accept anyone who wants to come the USA. I guess they have never really investigated how that inscription ended up of the statue.  I did and found this (from the NY Times!):

When the Goddess of Liberty was given to the United States, its donor’s agenda was to burnish France’s republican roots after the oppressive reign of Napoleon III and to celebrate the two nations’ commitment to the principles of liberty.

The only immigrants mentioned at the dedication in 1886 were the “illustrious descendants of the French nobility” who fought on behalf of the United States against Britain during the American Revolution.

But it was the words of a fourth-generation American whose father was a wealthy sugar refiner and whose great-great-uncle welcomed George Washington to Newport, R.I., that almost single-handedly transformed the monumental statue in New York Harbor into the “Mother of Exiles” that would symbolically beckon generations of immigrants.

Emma Lazarus’s poem only belatedly became synonymous with the Statute of Liberty, whose 125th birthday as a gift from France will be celebrated on Friday by the National Park Service.

Lazarus’s “New Colossus,” with its memorable appeal to “give me your tired, your poor,” was commissioned for a fund-raising campaign by artists and writers to pay for the statue’s pedestal.

But while the poem was critically acclaimed — the poet James Russell Lowell wrote that he liked it “much better than I like the Statue itself” because it “gives its subject a raison d’être which it wanted before quite as much as it wants a pedestal” — it was not even mentioned at the dedication ceremony.

Finally in 1903, after relentless lobbying by a friend of Lazarus who was descended from Alexander Hamilton, himself an immigrant, it was “affixed to the pedestal as an ex post facto inscription,” the art historian Marvin Trachtenberg wrote.

“Gradually, thereafter, the awareness spread not only of the significance of the lines of the poem but also of the significance of the aspect of national tradition it expressed,” another historian, Oscar Handlin, wrote. “Liberty was not simply the bond between ancient allies; nor was it only the symbol of liberal ideas of justice and freedom; it was also the motive force that had peopled the wilderness and made the country that emerged what it was.”

Barry Moreno, a historian of the statue for the National Park Service, recalled that it “was never built for immigrants.”

So, the next time the liberal left tries to use this in an argument about illegal aliens and refugees, you can hit them with the truth!

Yes it was a gift  of friend ship and remberance of our two nations casting off Britian. Never for Immigrants .

Lady Liberty was built for the American People . illegal immigration  will not be tolerated

Libtards think it was for immigrants.

Yes, it was a gift from France to commemorate the Friendship between the two Countries. At one time, Immigrants wishing to enter the United States, wanted our Freedom, wanted to become a apart of something that existed no where else on Earth.    They were carefully screened, even down to their Health.    They were offered nothing, only a chance to live in a Free Country & prosper.   They came with very little, struggled to learn English, and find employment, and assimilated.   They loved their new Country & were very proud to be Americans.  Contrasted with the "Litter" ,now coming to our Country, demanding all sorts of things, desiring our Country change to accommodate them, continuing to leech all the benefits, while defiling us.    America has enough people, close off Immigration, let's support the Americans here, "America First".

This needs to be taught in school and colleges and brought up at every opportunity in the house and senate. We should remind the president as well that we want the original words back on it and the bogus plaques taken off.

The plaque with the poem isn't bogus, but it wasn't part of the original statue.

The plaques that are there are "bogus" because they are telling a lie to those who read it.

It is like putting a plaque on a grave that Jesus didn't die for sinners and rise again. The plaque should say "Jesus is not here for He has risen after dying for sinners".

It is time to "STOP LYING" and to promote the truth!

We don't need our children reading these plaques and going away with that as the reason for this monument given from one republic to another commemorating  friendship.

I never viewed Lady Liberty as for immigrants.  The left started this history lesson.  Wrong as usual.

Those people came in legally.   Had a skill.  Wanted to work.  Wanted to become citizens of his country.  THey gave.   Unlike those coming illegally who take.   All with the help of corrupt politicians who rake in big buck$$$$$$$$$$$$$ to "help" them.

Once again they got it wrong it is NOT built to pay tribute to American Democracy and Democracy Throughout the World! Goddess of Liberty was given to Attest the Abiding Friendship Between France and The United States of America

The United States is not a democracy but a Constitutional Republic