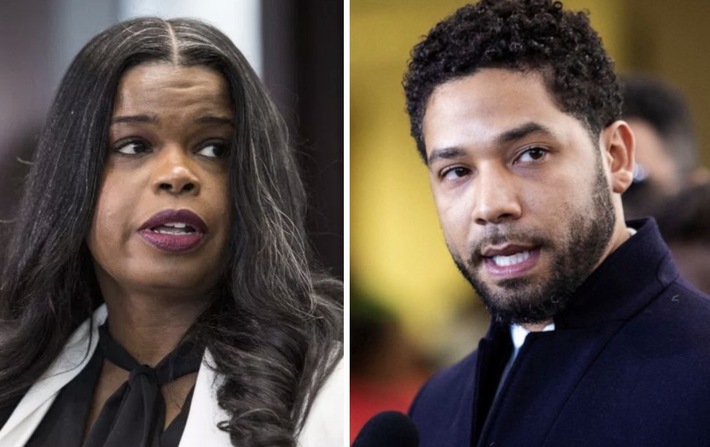 Whoever Kim Foxx is, Cook County State's Attorney, she is pertinent to the Jussie Smollett case, even though she allegedly recused herself from legal proceedings.

The Chicago Police department has called for a federal investigation into Ms. Foxx. Reports are that Michelle Obama's former Chief of Staff had privately attempted to intervene in the case— on behalf of the Smollett family.

Foxx also spoke to a member of the Smollett family:

Cook County State’s Attorney Kim Foxx—a self-styled “reformer” who gained office largely by riding the wave of justified outrage over the Laquan McDonald scandal—appears to have pretty much botched that task in her office’s handling of the high-profile Jussie Smollett case. By first intervening with police on Smollett’s behalf and now allowing her top assistant to dismiss a 16-count felony indictment against the tall-tale-telling “Empire” actor with the lightest of slaps on the wrist, Foxx has endangered her political future and, more important, faith in the local justice system. “The office owes the public an explanation,” former Foxx chief deputy Eric Sussman told me in a phone interview late today. “I agree with the mayor. It looks like a whitewash.” It sure does. [excerpt via Chicago Business]

Kim Foxx’s office didn’t merely drop all the charges against Smollett, not long after Foxx began playing “Obama Celebrity Friends” with former first lady Michelle Obama’s onetime chief of staff. Foxx’s office dropped the charges, yes. But also as part of the deal, he will be wiped clean. His lawyers want his record expunged. That could happen as soon as today. The stain of the 16 counts in the indictment will be scrubbed right off him. You might say Foxx is bathing him in the waters of the Chicago Way, cleansing him, and making a new man out of him. And now he’s smirking at the city, the mayor, the cops, everyone. [excerpt via Chicago Business]

Additionally, the Chicago Police should file criminal charges against the prosecutor for corruption and ask for a subpoena on all communications and records and payments made to her to Foxx

When David Alexrod is against your story, you are really up a creek:

It’s incredible that after all these years, Chicago still deserves the nickname, the “windy” city. Do you know that nickname’s original meaning was never about the weather but the politicians?

Smollett's lawyers are floating the possibility of their client suing the city of Chicago. It that's true that's a bad move. Because during the suit all those documents that Smollett has managed to expunge might well re-emerge and the deposition process will catch virtually anyone who has any involvement in this case in his web. So, if filing a civil suit, Smollett will be exposing virtually everything he has so far managed to conceal.

Smollett needs to understand that a civil suit - is just that - civil and during depositions and judicial testimony he cannot raise the defense of self-incrimination to avoid answering questions. All that 5th Amendment stuff only applies in criminal prosecutions, not in civil ones. And, during a civil action, he can be required to testify and testify against his interests.

Any attorney that represents Smollett who would threaten a civil action against the Chicago PD or Cook County, etc., is a fool.

Sooner or later the truth will come out.