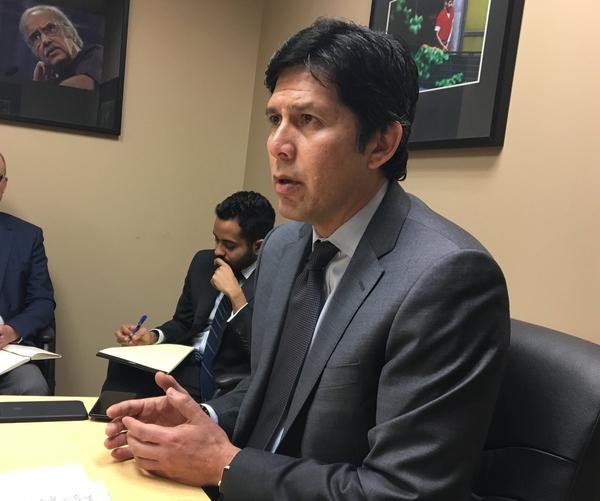 De Léon, who introduced the bill, made his remarks at a hearing in Sacramento on SB54, the bill to make California a “Sanctuary State.”

Testifying before the Senate Public Safety Committee, De Léon defended the widespread practice by illegal aliens of using fraudulent documents to work and obtain taxpayer-paid benefits, dismissing any concerns California citizens may have about being the target of identity theft.

In an interview the following day on KPCC 89.3’s Air Talk with Larry Mantle, De Léon expressed outrage that President Trump’s executive order would include those who possess fraudulent documents or committed identity theft to obtain a Social Security number.

“Someone simply who received or purchased a [fraudulent] Social Security card down at McArthur Park, or elsewhere in my district would be eligible immediately for mass deportation,” De Léon said (at 11:45 in the link above).

“He’s trying to deputize police officers — and with the suspicion of someone being a criminal or having a broken taillight, that they themselves, as a local police officer, could call the ICE agents immediately and have that person deported without even legal due process.”

Hi Marilyn,
I was listening to a radio interview with the webmaster for immigrationcounters.com and he was saying they used information gathered from trail cameras secreted to watch coyotes bringing in hordes of ILLEGAL aliens to the U.S. and then came up with a live count.  An estimate, yes, but I would venture to say their live count of over 27 MILLION is a lot more accurate than the corrupt"o" rat count, supposedly from census figures.  After all, the corrupt"o" rats wouldn't lie and neither would those, "Honest, hardworking" ILLEGAL aliens, would they?
So, a realistic count of 27 MILLION, plus the estimated 4-6 MILLION Visa overstays, and 30 MILLION would be a realistic and conservative estimate.  Consider also that the 11 million the corrupt government offers, is also what the census figures that were quoted from 2003.
BTW: the other site is actually theremembranceproject.org, and they keep track of all the people killed by ILLEGAL aliens each year; horrendous and eye opening for sure.

This is a good site.  Didn't know anybody was actually keeping track...you'd THINK the government would be doing that, but then they couldn't have plausible deniability right?  Added my name for their emails.  Thanks for the link.

Trump should use this information when he talks about illegal voters that took part in our election.  According to the news media there was very little voter fraud.  NBC-CBS-ABC all agreed.  Everyone knows that Trump is right on this issue.  He won the legal popular vote.  He lost the illegal popular vote.  If you are illegal in this country who would you have voted for?  Therefore, when our elected officials believe it is correct to invite illegals into America and let them purchase false citizenships they are destroying the American way of life.  I do not want to live the Mexican way of life otherwise I would move to Mexico.  Corruption is a way of life in Mexico.  In Mexico buying false documents is expected.  Cheating is looked on as honesty as long as you don't get caught.

You're right about the way of life.  A family of ILLEGAL aliens caught in Fountain Valley having some $5,000 in counterfeit money they printed off on a LASER printer.  A national motto in mexico and a rallying cry for ILLEGALS - Si no hago trampa no salir adelante. If you don't cheat you don't get ahead.  Once again the lame stream media is complicit.  On the nightly news, AKA the Ministry of Truth, as they aired this story; a jaunty attitude, no big deal, basically, ha ha, boy is this funny.  Never is there a mention that this scum is already criminal by being in the country ILLEGALLY, (Not undocumented, they have plenty, either forged or stolen, probably printed their own too.) and adding another (Major) crime by counterfeiting money; no mention of the hardship of shopkeepers they tried to cheat.  I would wonder if their house in one of the FIVE MILLION fraudulent mortgages in the HUD portfolio.  Yup, just another “honest”, hardworking group of ILLEGAL alien criminals looking to be part of the American dream and we get about a thousand more a day to add to the 30 MILLION already here!

I agree... it is time to hold these traitors accountable for their treason.

Our churches and so-called religious groups bring these illegals here because they get like $ 3,000 per person.

If you attend a Church in league with the Devil for money... leave them... find another Church to attend.

Stupid is as stupid does.  According to De Loen "Someone simply who received or purchased a fraudulent Social Security would be eligible immediately for mass deportation"    According to the California State   Senate President  Pro Tem it is a Mexican privilege to purchase illegal Social Security Cards as well as fraudulent documents while dismissing the simple facts that he himself is justifying breaking the laws of the country and the state.  This is what's wrong with America.  The rule of law does not apply to the minorities in our country.  What De Loen should have done is taken his family members under his wing that are not eligible and helped them to become eligible not help them become felons.  Stupid!

california has become a trash dump for mexico's trash.