Friday at the 2015 Southern Republican Leadership Conference in Oklahoma, former U.S. ambassador to the United Nations under President George W. Bush, John Bolton, said former Secretary of State Hillary Clinton is “responsible for the tragedy of the murder of U.S. Ambassador Christopher Stevens and three other Americans,” in the 2012 terror attack in Benghazi Libya.

Bolton said, “I think the most telling information that we have seen in this limited number of emails is that there are repeated examples of Secretary of State Clinton being told in 2011 and 2012 that the security situation of our personnel in Tripoli and Benghazi was very precarious. The country’s government had fallen apart—that the threat from terrorist attacks was high and that our people were very concerned about it.”

He continued, “Now you’ll recall in her limited public appearances to date that she has said, you know, I don’t get involved in that security stuff, you know, I have people that do that. Well I have to say when I heard that I was stunned. I’ve worked for six different secretaries of state, everyone of them coming from very different backgrounds, every one of them cared about the safety of the Americans who worked for them in the State Department. And not one of them would have missed the danger that our diplomats in Libya faced.

For the Clintons it all started with V. Foster who it is alleged to be a suicide. (White Water)

Foster wasn't the only one who was alleged suicide. The Clintons had 30 something people who either work for them in Arkansasa or when Bill was governor. These people died in auto accidents or were killed by so called robbers. I often wondered about how much the Clintons had to do with these deaths. I sure everyone of these people had something on the Clinton's especially the men that work for the Arkansas Highway Patrol. These were men who provided security for the Clintons during their rein in Arkansas. I never believe a man like Vince Foster would commit suicide and to this day don't believe he did it. I bet there is someone who know's the truth.

If Vince committed suicide, then explain how the gun was found away from his body and his arms were both folded over his chest?

Of COURSE he was murdered. Anyone who ever crossed the Clit-ons is dead.

HARD TO BELIEVE, YET TRUE.

Anyone who's awake knows hitlary is responsible.  It would be nice to see her swinging from the gallows.

Martha, Lillery is responsible for refusing calls for more security, but her then Massa Ovomit is personally responsible for the murders of 4 Americans as he gave the order to two Military Commanders, Gen Ham and Adm Gaouette, to stand down when they were readying relief missions during the fight.

Hitlary and Obama have more blood on their hands than we can count.  They've committed treason left and right and not one thing is being done.  Makes me sick!!!!  I really want to see a public hanging.

Been saying and posting for over a year:  Testimony and documents presented to the original (Issa) hearings (watched via C-Span) show that Hillary Clinton is Guilty of Manslaughter and/or Criminally Negligent Homicide in the 'Bengazi Affair'. The release of the EMails seems to have prompted John Bolton to state the same conclusion.

If Bolton is not an advisor to the next Republican president on Foreign Affairs, there is something seriously amiss.

WELL MY QUESTION IS ?  WHAT ARE THEY GOING TO DO ABOUT THIS AND HOW SOON ???? 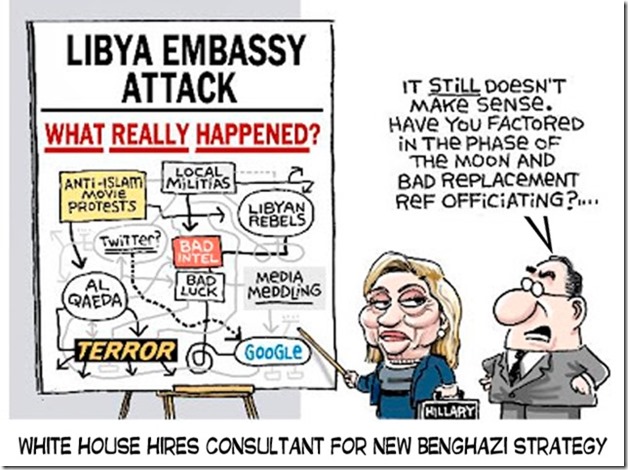 The Blood of Benghazi drips from her hands. The Laws, they have ignored in their nefarious activities make Organized Crime look like minor League Baseball Team. Guilty, guilty, guilty on about a 1000 Counts!!!