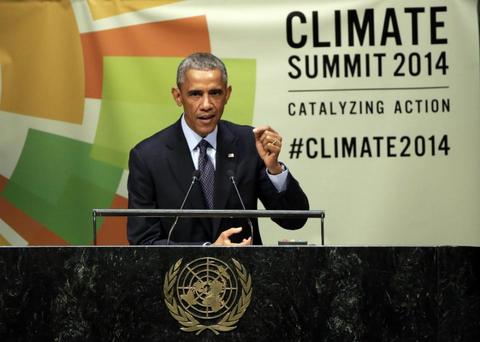 WASHINGTON (AP) — President Barack Obama's determined efforts to combat global warming face their biggest trial yet as Republicans take full control of Congress this week. The GOP vows to move fast and forcefully to roll back his environmental rules and force his hand on energy development.

The GOP's first order of business: the Keystone XL pipeline. The Republican-led House has repeatedly passed legislation to approve the pipeline, which would carry tar sands oil from Canada deep into the United States. The bills died in the Senate when Democrats were in control, but that will change Wednesday when a Republican-led Senate committee holds a Keystone hearing.

"The president is going to see the Keystone XL pipeline on his desk and it's going to be a bellwether decision by the president whether to go with jobs and the economy," Sen. John Barrasso, R-Wyo., said Sunday.

Success for Republicans on the climate front would jeopardize a key component of Obama's legacy. And the ramifications would likely ricochet far beyond the United States.

The Abomination and Pathetic Pathological LIAR and Sunni muslim Barack Hussein Obama is so WRONG ABOUT Climate Change!!

Climate Change was made up by LEFT-WING LIBERALS that are mostly Demoncrats!!

I'll believe it, when I see it challenged,...AGGRESSIVELY!