Benghazi Impeachment Suddenly Not So Far-Fetched 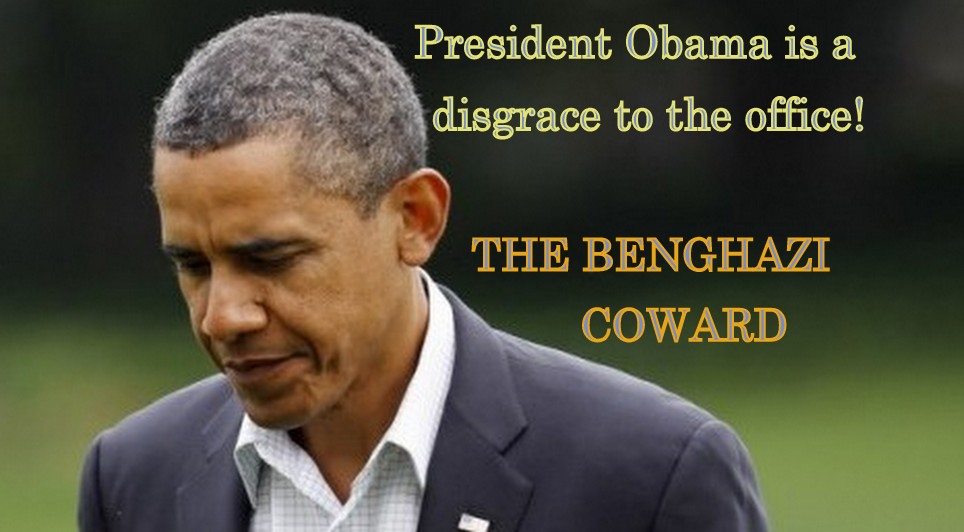 On October 27th, 2012, only days before the presidential election, I wrote:

If Barack Obama is reelected, will he face impeachment over Benghazi — a yet more unpleasant and far more wrenching result than to lose an election?

It could happen — and in my estimation should happen — the way revelations are playing out over the bloody terror attack that took four American lives and has led to weeks of prevarication and obfuscation.

The scandal thus far has at least tarnished and quite possibly implicated everyone from the CIA director, to the secretaries of State and Defense, to the UN ambassador and, of course, the president himself — with no end in sight, because Obama, normally loath to expose himself and even less so in an election season, refuses to answer questions on the subject.

It’s not the crime, but the cover-up, we learned in an earlier impeachment, only in this case the crime may be just as bad or worse.”

SO, what'cha gonna do ZONA????? You going to capitulate?? How many years do you expect to live?? Under KING-OBAMA, or HILLARBEAST?? NO MORE AMERICA? YOU want it that way?? Are you a PATRIOT or not? I believe GOD IS IN THIS, and HE WILL OVERCOME OBAMA, by way of US!! With HIS WILL!! I expect not to be around too much longer. But, it will be a better place!! I and many will not be here, But we will be in a better  place!! LOL!! ( lots of luck!!). SSEMPER-FI ! Larry K. Parent, Naples,FL.

They should remove him on the grounds that he was not eligible to begin with. Impeachment

would just leave us with Dumbo Biden and all the marxists he has installed in our Government.

With O'Reilly and the MSM debunking the "birthers" at every crossroads, the truth will never be allowed to come into play.  O'Reilly is an Obama apologist and the MSM downplays every truth of the birther movement.  It will never come to the surface as a reality.  Never!  The 'fix' is in.

Obama and Hillary both need to be exposed and made to face justice.

They may ultimately be exposed, but I doubt they will ever face justice except on Judgment Day.  They'll need to bring along their lunch because it will be an all day affair.

It takes a while to impeach agood for nothing criminal president,so why have none of the ballest Repubs. I am sick and tired of this half breed illegal communist muslim and his minions downing Christians and it is time for us to stop turning our cheeks and start doing some punching back, God wants us to be forgiving but only to a point and we have gone beyound that point long ago.My bible tells me that a man that will not provide for his family is worse than an infedel and that means protection to well I am ready start taking out all of these liberal slime balls, Muslim jokes that say they are a peaceful religion,they are not a religion they are a waring cult read your history if England had not defeated them during the crucades they would have taken control of the world then, now is the time to stand up and defend our families and country,by taking these jihadist out feet first, asnd all of these illegals DEMANDING citizenship the cops should have cordoned off these jerks cecked their papers if they do not have LEGAL documentation then load their ass's up and put them back across the border or where ever they came from

FINALLY!! ARE THEY REALLY TAKING THIS ON?? But not only IMPEACHMENT!! KING-OBAMA, CAN BE 'COURT-MARSHALLED'!! After all, he is in charge ,(unfortunately), of our MILITARY!! Forgot about that, HUH??? PRAY!! SEMPER-FI !! Larry K.Parent,Naples,FL.

It will never happen.  Impeachment, I mean.  Never.  The MSM and the "Beltway Cocktail Circuit" and the Demo-Nazis and their RINO Quisling lackeys will see that it never happens.

IF NIXON WAS GOING TO BE IMPEACHED BECAUSE OF LYING AND SPYING ON THE DEMOCRATS. THIS DORK HAS DONE THINGS FAR WORCE THEN NIXON, AND IF THE SENATE DON`T DO IT`S JOB ALL OF THEM SHOULD RESIGN, WE THE PEOPLE DEMAND THAT HE BE TROWN OUT OF OFFICE ALONG WITH HIS FOLLOWERS. HE HAS DONE NOTHING BUT DESTROY THIS COUNTRY. HOLDER A FELON,THE GUY IN CHARGE OF THE I.R.S. A TAX CHEAT. TAX TAX TAX THATS ALL HE WANTS TO DO. NOW HE WANTS THE U.N. TO TAX US, COME ON THIS GUY WHAT EVER HIS NAME IS HAS WRECKED THIS COUNTRY

Here is the thing:  Obama loves to use [misuse] Federal Departments of the IRS, FBI, Justice Dept, 'Home Land Security', etc., to harrass, arrest and worry folks that THEY consider enemies, like: Christians, Veterans, Patriots and Constitutional defenders, etc.  This crap/ activity is ILLEGAL!  And if simple, common folks commit treason, they can expect the full weight of the law to comdemn and prosecute them -- so what's good for the goose is good for the gander.  Also, We the People, will  be a bankrupt nation pretty soon, and this Benghazi misadventure will then get buried under the rug, over shadowed by much bigger stuff coming down the pike.  Strike now, while the iron is hot!

HMMMMMMMM,... a thought came to me,...OBAMA wears his MUSLIM ring of faith, and the wedding band, on the same finger!! He said, 'MY MUSLIM FAITH IS OFF-LIMITS, TO TALK ABOUT!!', ( 2008). MUSLIMS define us as their enemy!! I wondr if he is really using JIHAD ??????? This would explain a great deal!! HE can also 'LIE-CHEAT, Aand STEAL' !! i wouldn't put anything past him at this point!! If that is the case, we can get him out by using 'CONSPIRACY , TO COMMIT A COUP, from within the UNITED STAES GOVERNMENT', AIDING THE ENEMY, AL QUEADA/ HAMAS/ and other enemies of our country!! This would BE HUGE !!! I believe he is using his MUSLIM faith, to destroy us from within!! He appears so innocent and charming, so he can have the lame-stream media, to exploit THAT, to the brainwashed ,and uninformed!! Afterall, he IS appointing MUSLIM BROTHERHOOD members all over the place!! So, it would ony 'APPEAR', as if to say, he would have them for our safety!! HA!! Think BOSTON !! SEMPER-FI!! Larry K.Parent,Naples,FL.