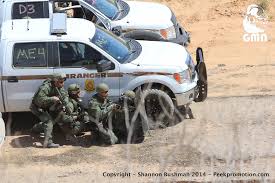 The Bureau of Land Management is a ‘gestapo’ according to officials who testified at a House hearing yesterday.

We have the beginnings of gestapos in every government agency and they are growing in power under the perceived authority of the President of the United States who rules this country via executive orders and “guidance” memos without any congressional oversight. He is militarizing his executive branch agencies and letting them run roughshod over citizens largely without restraint and supervision. They can’t be fired as we know.

One of the agencies that has become militarized and which has gone rogue is the Bureau of Land Management.

A hearing in the House on July 24th exposed a dangerous and persistent threat to our nation coming from the Bureau of Land Management (BLM) which is allegedly intimidating citizens, threatening their rights, and creating a hostile environment.

POLL:Is it time for Congress to remove power from the un-elected bureaucrats in Washington?

At the hearing this week, the following was uncovered:

State and local governments, ranchers, business owners, and private citizens have been subject to threats, lack of cooperation, and numerous unfair or heavy-handed tactics which threaten public safety, the environment, endangered species, and the livelihoods of communities. Congressional oversight is necessary to provide an effective check on federal officials who abuse their regulatory powers.

“Today we took a second look at threats, intimidation and bullying by Federal Land Managing Agencies. During a hearing the Committee held last year and again today, we heard first-hand accounts of mistreatment at the hands of federal officials seeking to extort the witnesses into relinquishing their property rights,” said Representative Doug LaMalfa (CA-01). “These firsthand accounts give the victims of abusive conduct by a federal land managing official a chance to tell their story to Congress. Status quo agency oversight, policies and procedures are inadequate for addressing or deterring employee abuses and may instead embolden overreaching or malicious employee behavior with little risk of retribution for their actions.”

Witnesses highlighted examples of flagrant intimidation met by citizens who refuse to surrender their constitutional rights, land and water rights, grazing permits and other multiple-use benefits.

“BLM’s attitude towards coordinating with local law enforcement is summed up best by a conversation I had with a BLM law enforcement officer while we were attending a drug task force meeting in Cedar City, Utah. He told me point blank that he didn’t care about any authority that I thought I had as the Garfield County Sheriff, and that he did not feel like he had to coordinate anything through my office… This refusal to coordinate, coupled with a lack of any meaningful oversight, has created a perfect environment where the abuse of federal law enforcement powers can occur.”

Leland Pollock, Garfield County Commissioner, Garfield County Utah, testified on how BLM law enforcement has moved away from a public service philosophy due to polarization of personnel and bullying and cancellation of cooperative agreements.

“Our concerns/ complaints are not just a matter of hurt feelings, bullying, intimidation, lack of integrity, and a host of social issues. BLM’s Chief of Law Enforcement has cost Garfield County real dollars… We are befuddled how one individual can override a State Director and negatively impact an entire county with impunity.”

“When I was a boy and as I grew up the few Federal Agents were mainly local or from rural areas and fit in well with the local area. They knew the people and worked cooperatively. Now the Federal agents are predominantly from outside the area and do not develop connections with the locals as was done previously. Many start off with a belligerent attitude, even a commanding presence. They are especially offended if anyone opposes any Federal Government actions. The worst are the Federal Law Enforcement Agents that arrogantly announce that they are not governed by Nevada law, but can enforce it if they choose. Now we have been informed, that without notice of hearings, the BLM has determined that two more BLM Law Enforcement Agents are necessary to control the people in the Elko area. All of this is resulting in less use of Federal Lands by citizens as the citizens become afraid of being accosted and berated.”

“Endangered species ‘protection’ is the biggest culprit. At the moment the Fish and Wildlife Service is considering critical habitat for the lesser prairie chicken, the New Mexico meadow jumping mouse, and two varieties of garter snakes. Expansion of the Mexican wolf habitat is expected as early as tomorrow. We have had 764,000 acres in New Mexico and Arizona recently designated critical habitat for the jaguar although only a few male jaguar have been sighted in the U.S. over the last 60 years… In my own case, the BLM has been buying up private lands near my family ranch within the boundaries of an Area of Critical Environmental Concern that they designated part of their Resource Management Plan. They not refer to our ranch as an in-holding. What this designation has done is de-valued our land and effectively prohibits any type of future development on the ranch.”

The armed BLM even intimidates visitors to the county according to Pollack.

Rep. Chris Stewart, a Utah Republican whose district includes Garfield County, pushed for his legislation that would defund what he says are paramilitary units within federal agencies that don’t need such heavily-armed forces, including the BLM.

Disarm ALL alphabet agencies and ABOLISH most of them, PERIOD!

Amen!! We The People can keep our GUNS though!!!

John: It certainly doesn't look that way.. does it?  From that muslim in the Oval Office right on down the alphabet agencies... they think WE are the simple servants.  They all forget who foots the bills!

It's extortion!  And we pay the price for them to "protect" us!

The park service has had M-16's since the war ended in Nam,  they are the authority if you don't think so just ask them.  Hauling around these weapons makes them believe they can do any thing to anyone and get away with it.  TIME TO TAKE OUR COUNTRY BACK FOLKS.

WONDERFUL BUT WE CANNOT DO IT ON COMPUTERS AND YOUR PLAN IS?

We know what side our Liberal Marxist media is on don't we? Obama has a free hand to commit high treason and has! Nothing was done, mostly because of allowing Marxists in our Senate, many of them supported by the Marxist billionaire Soros! One evil man got his way and it was love of money by Democrat Liberal politicians that radical treasonous media supports!

Yes, fear of retribution! Do we see now we have to stick together as Americans? If you want to give up your freedoms and loose them for others, support your perversion or the murder of babies because you are not responsible... instead all Americans must of been in bed with the 2! Do we see this is what the Liberal media uses against us all? Proof? When do we hear about the father of these unwanted children? It is our right if our taxes are paying what these sexual perverts should be paying!

Obama continues to make good on his threats to establish a domestic armed force equal to that of our military.  With his total disregard of due process and our Constitution, the "Brown Shirts" of the 30's would be proud.

Rules for Radicals is written for the Have-Nots on how to take it away.   According to Alinsky, the main job of the organizer is to bait an opponent into reacting. “The enemy properly goaded and guided in his reaction will be your major strength.”

Through a process combining hope and resentment, the organizer tries to create a “mass army” that brings in as many recruits as possible from local organizations, churches, services groups, labor unions, corner gangs, and individuals.