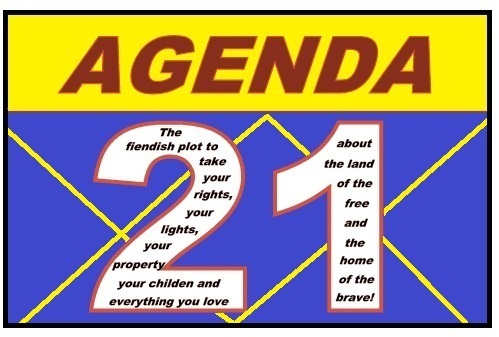 More and more people are awakening to the reality of U.N. Agenda 21, and here at "For Truths Sake," we are trying to the best of our ability to show you exactly what Agenda 21 is. It's a very complex subject that involves many different "agendas" in fact, and they all revolve around securing a one world government headed by the United Nations. To write one conclusive piece of the entirety of Agenda 21 would be an exhaustive effort even for the most dedicated writers. So what we decided to do was to highlight actual events in the U.S. and tie them back to the U.N. agenda showing you the actual source. For instance, today Dr. Fred wrote a piece on the Committee on the Elimination of Racial Discrimination, which is actually an initiative being governed by the U.N. which attempts to portray the U.S. as a racist nation for the purpose of allowing themselves the opportunity to assert control and eliminate our sovereignty.

Agenda 21 is actually another term for "sustainable development," which originated at the Earth Summit in Rio back in 1992. The whole premise of Agenda 21 is based on the belief that the world's industrial powers are destroying the environment by causing "global warming" and only by radically altering the way we live can the planet be saved from our destructive selves. The aim is to eliminate private property rights, remove man's footprint from the rural parts of the world and herd them into the cities, control populations, and force us to live under their rule by ensuring all nations are completely disarmed. Many will balk at this; however, as I said before we intend to resort right to the source of U.N. materials which are out there in plain sight for all to see. This way, the most we can be accused of is misinterpreting what we are reading.

Let's start with the recent attacks we have seen against private land ownership in the United States more specifically, the way our cities are rezoning the land we own and exercising more and more power over it. Communism has a long history of denying people the right to own private property, in fact, the Soviet Union removed all farmers from their land and forced them into stacked apartment complexes in the name of preserving the environment and collectivism. The United States constitution guarantees the rights of individuals to own property because property ownership is the very vehicle in which private wealth is created.

In 1991, the then governor of Arkansas, who was relatively unknown at the time, was invited to attend the Bilderberg meeting in Baden-Baden, Germany. Just over one year later the governor, William Jefferson Clinton, became the President of the United States.

The former Prime Minister of the United Kingdom, Tony Blair, likewise came to power as the UK’s Leader of the Opposition one year after attending a Bilderberg meeting in 1993.

Now we see that the current Democratic mayor of Atlanta, Kasim Reed, was invited for this year’s Bilderberg conference in Copenhagen.

“He’s seen as one of the few legitimate Democratic candidates for higher office in Georgia,” a Republican strategist told Roll Call in 2012, adding that he will be a formidable adversary to the GOP.

It would appear that Bilderberg is grooming him for just that.

Besides modern-day king making, the Bilderberg Group also has tremendous influence in economics and geopolitical events.

In reality, the Bilderberg Group is pushing ahead with its anti-free market, state-corporate takeover*** designed to destroy independent nations as well as the individual in order to make the population dependent on a system controlled by the tiny elite well-represented at the conference.

***we're watching that now here and more violently currently, abroad.
Wake up America - our current Admin/Congressional backers of this Admin (aka Democrats and McCain et al) are the ones continuing the Clinton/Blair plan.  And apparently, at least from what Hillary informs, it's a thankless job for [them] that has left them all cash-strapped(?) and broke(?!!!)  Liars!

Evil beyond the door and if the world does not wake up it is the end of individual and national freedoms.It is sick and the Demoncrat Party in the US supports it!

American citizens cannot allow compomise of OUR freedoms. Our position in the world will determine much of what happens.. What we allow, much of the free world will allow. Americans better wake up as was spoken by the character Forest Gump... stupid is what stupid does. Is it not time for the poor; our middle-class; the rich to wake up? You are about to see the worst that ever happened on earth and Democrat voters and those elected by them have been supporting it!

If the United States of America is strong enough to stand up and do the right thing, the world will follow forward against the madness.  You just keep praying we're not that lost yet.  Hope so./

Funny, I keep thinking back to that whack:  Jim Jones and his followers through all of this.  Seems the current dem's in power studied him/his followers or something? Very close in social engineering if you know about how that psycho did what he did.   And their studies/consultants' advices have not been to see the evil he caused for so many, but instead to enact an almost identical plan to pacify/lead so many currently to their demise.  ...same as Hitler and others.  We're still not evolving much as a society if we keep following the Pied Piper.

Golly... back in the Clinton ADM.   We have many  disasters to thank them for.   Terrorists freely roaming this country in the 90's=9-11.   Common Core funded by Geo Soros=destroy education.   Fanny/Freddie housing collapse=slush fund for Dems.  Agenda 21=collapse of US.   Hillary big buddies with all the terrorists groups in the 90's till she needed the Jewish vote for NY Senator.   These people just keep giving... Obumo another Geo Soros backed Anarchist.

Bundy Ranch a fine example. Well we won that one without a shot being fired.

Next time the nazi bastards probably won't be so lucky.

It sure sucks when your congressman won't answer a question about why they did nothing to punish the BLM for their unconstitutional actions and he constantly ignores your calls and hangs up on you.

Guilty of treason and ignoring the people if you ask me. But we can just keep on taking it, right?

Agenda 21 may take place right after a bloody civil war here in America. There are millions of armed Americans who WILL NOT go quietly into slavery without a fierce fight. The elitists are well aware of this and are trying hard to disarm America. Won't be any surrendering of firearms in this family other than one-round-at-a-time.

The next "Bundy Ranch" confrontation could well erupt in gunfire.  Last one started on the Lexington Green with the British seeking to confiscate firearms.  Next one will start.......?

That is how we see it. Bastards aint takin nothin but one bullet per nano second. Slidefire.com

Permalink Reply by Robert William Metcalf on September 12, 2014 at 7:47am
The right to own property in the US is a myth!

They are after the suburbs.

Agenda fits wonderfully with Obama's wish for our country. It is purely against everything in our Constitution, giving property rights to the government away from the people and making them totally dependent on government.

Is anyone AWAKE yet???